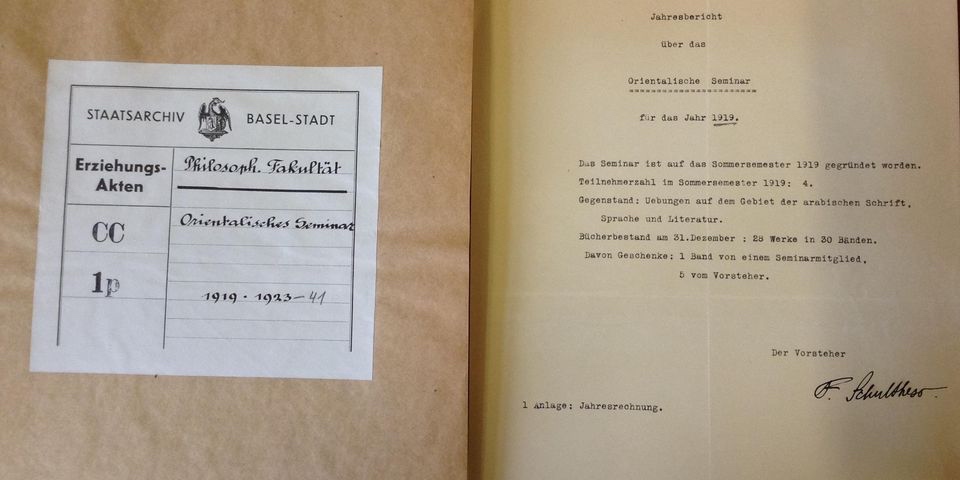 Albert Socin (1844-1899), born in Basel and educated in Göttingen, Leipzig, and Halle, taught in 1871 for the first time "Oriental" languages (Arabic, Persian, Turkish, Kurdish, Sanskrit) in Basel. In 1876 he left for Tübingen and then later Leipzig.

Adam Mez (1869-1917), originally from Freiburg im Breisgau, has to be regarded as the real founder of Islamic Studies in Basel. 1894 he obtained a venia docendi at the University of Basel for Semitic languages and literatures, to be followed soon by the position of extraordinary and full professor.

After Mez' early death Friedrich Schulthess (1868-1922) from Zurich, who had already been teaching Semitic languages in Königsberg and Strassburg, took his place and established in 1919 officially the Seminar of Oriental Studies in Basel.

Rudolf Tschudi (1884-1960) from Glarus held the chair in the years 1922-1949. During his tenure the original focus on Semitic languages was widened and other Oriental languages, in particular Ottoman and Turkish languages, were given more prominence. With the new approach of "Oriental Philology" a huge step had been taken beyond the field of Semitic studies - a step that had already been recommended by Adam Mez.

With Fritz Meier (1912-1998) taking the chair in 1949 the name was again changed to "Islamic Studies with a particular stress on the history of the Islamic religion and Persian Literature". Meier, besides producing a large oeuvre in the field of Islamic studies, is particularly renowned for his works on Islamic mysticism and Persian poetry.

Gregor Schoeler (born 1944) followed Fritz Meier in 1982 and retired in 2009. His expertise as an Arabist, scholar of literary studies and the early Islam makes a strong resemblance to the work of Mez.

Since 2010 Maurus Reinkowski has taken up the position of Professor of Near and Middle Eastern Studies. His fields of research are the modern history of the Middle Eastern and the Eastern Mediterranean.

In 2013 the Seminar has given up its former designation as "Orientalisches Seminar", following thus the general trends in international academe. Since then it has been named Near and Middle Eastern Studies.

Premises of the Seminar of Near and Middle Eastern Studies

Since its foundation in the year 1919 the Orientalisches Seminar has moved many times within the city of Basel – a fate typical to many institutions of Basel University. Since 2007 it is located in Maiengasse 51.